Since I don’t consider Thanksgiving to be one of my favorite holidays, I decided it would be a good time to get out of town for an outdoor mini-adventure. My friend Cecily, from grad school, flew into Phoenix where I drove to pick her up. We had the best Thanksgiving dinner ever – bad pizza and rootbeer floats at a truckstop outside of Tucson. Afterwards, we drove around FOREVER trying to find the Forest Service lands that we were told about so that we could camp for the night – finally, we found the turnoff for French Joe Canyon and set up for the night.

It turns out that our campsite was just next to Karchner Caverns State Park, which we explored the next day. It’s a pretty cool state park – it’s got a good museum and gift shop, although their coffee wasn’t the best. We took a tour of the Rotunda and Throne Rooms, where we saw Kubla Kahn, the biggest column known in the state of Arizona. It was pretty spectacular, although I can’t show you any pictures because there were no cameras allowed. Bummer for you!

After that, we drove east through Willcox, then took a forest service road through the Chiricahuas to the South Fork of the Cave Creek trail, just west of Portal. We hit the trailhead around 2:30, so it was a bit late; just before we got on the trail, a man approached us to tell us to be careful of all the illegal immigrants and drug smugglers coming through the area. Thanks, dude! After about a mile and a half, we turned off the Cave Creek trail and onto the Burro trail, which took us up and to the east. We didn’t get terribly far that first day because we got a late start; also, we needed to take advantage of the first flat spot we found in order to set up a tent. By the way, I need to thank my friend Glen for loaning me a bunch of ultralight equipment which reduced 20 lbs off my pack load. So if you’re in the market for a new pack or tent, go to his website, Gossamer Gear, to check out the goods! 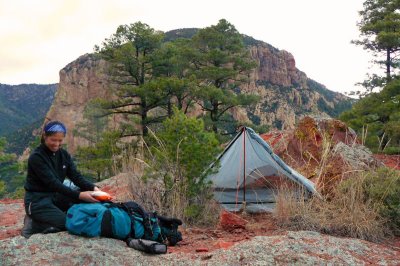 Anyway, it was clear that others had used the same spot we found, since there were water bottles and toilet paper scattered around the perimeter of our site. I cooked up some yummy pad thai and Cecily started a fire to let all the smugglers know that we were there and not to bother us. It was a rather cold night – I didn’t get a lot of sleep because 1) I was listening for drug smugglers emerging from their hiding spots to steal our food (which they didn’t), 2) Cecily snores, and 3) it was freaking cold. We woke up to a sheet of ice on the inside of our tent, frost on our sleeping bags, and I even had frost in my hair! But a hot meal of oatmeal and peanuts and cranberries and tea warmed us up pretty good, at least while we waited for the sun to come out.

We continued on our way, up up and up the trail – and the views just kept getting more and more spectacular. We watched flocks of band-tailed pidgeons fly around below us. There were incredible rock outcrops all over the place. And the sun was out, which was in contrast from the days before. We hit Horseshoe Saddle at around noon, and there was lots of evidence that illegals had been coming through – water bottles, clothes, discarded packs, food containers, and even syringes. And unfortunately, because there was so much activity, a lot of social trails had been created, which were in fact more evident than the official trail we were trying to follow. So, at around 8000 feet, we ended up losing our trail and hiking down several fake-out trails that led us into a steep drainage.

We started bushwhacking our way down the drainage, which we knew would take us back to Cave Creek and the original trail that we were on. In my estimation, given the amount of shit in the drainage, there were approximately 359 bears in the vicinity, in addition to the drug smugglers which were surely hunkered down waiting for nightfall. Cecily and I scaled several bouldered drop-offs with few problems, but our luck didn’t last forever; Cecily fell down a 15-foot rock face and sprained her ankle really badly. But she was hard-core and didn’t cry or anything; we taped her ankle up, loaded her up with ibuprofin, and I gave her my hiking pole to hobble along on. We were only about halfway down the drainage at that point and it was starting to get dark and cold, and there was definitely no place to camp, so we decided to just try and get out that evening. I had to go ahead of Cecily and try to find the best way down the canyon drainage, which still had several rocky drops before we hit Cave Creek around dusk. But we were so happy to hear that running water!
We didn’t find the trail right away and hiked up the opposite side of the creek until I decided we needed to go back down to the creek where we would definitely find the trail at some point. Which we did – Cecily ended up hiking about 3 miles on her bum ankle, but with head-lamps and hiking poles, we made it to the car and set up camp at the Sunny Flat forest service campground. Whew! It was a good thing that Cecily brought some Vicodin with her…
The next morning, we drove back over the mountains to the Chiricahua National Monument, where the medic/ranger wrapped Cecily’s humongously swollen ankle up and provided her with ice packs and an airsplint. We drove through the monument and took in the amazing views at Massai Point. Finally, we drove back through Willcox and into Benson, where we ate a huge dinner at Apple Farm restaurant, one of the best meals I’ve ever had. The mashed potatoes were AWESOME!!! I felt like I was going to have a food baby.

We then drove back to French Joe Canyon and camped at the same spot as our first night – but this time we started a fire (with a little help from a bit of denatured alcohol, thanks) and had smores. Yummy! The following morning, we went back to our Thanksgiving day truckstop and paid $5 each for a shower. This was the first time I’ve ever had a truckstop shower, and it’s not nearly as dirty as it sounds. It was actually quite refreshing – I even managed to comb the emergent dread-locks out of my hair that had started to form during the past few days. Then, it was back to Phoenix to drop Cecily off at the airport, and then back to San Diego.
It was really a fun trip, all minor injuries aside. It was great being outside and getting my mind completely off of work for a few days, although I wish the trip could have been a little longer. I have more pictures that you can view through the slideshow link on the right side of my blog, and Cecily will be sending me her pictures as well, so there will probably be even more photos soon. It was a good Thanksgiving – even if there wasn’t any cranberry sauce involved!

I know, it has been a long time since I posted on my blog. But, seeing as how I’m a regular Joe Blow now with my regular Joe Blow job, I don’t have time for all this fancy high-tech frivolity. Work, tv, sleep. Work, tv, sleep. Work, tv, sleep. Oh yeah, and my internet connection has been on the fritz, too. And it’s still not completely fixed – for one, right now I’m connected with a rather short cable to my DSL modem, which is pretty darn inconvenient when you’re used to being wireless. Plus, my neck gave out this past week – I was essentially immobilized on Tuesday and missed work because I was having sharp unbearable stabbing pains in my neck and shoulders with every fraction of a movement I made. I went to the chiropractor for the first time ever on Tuesday and man, those were some scary sounds my neck made. Cracky, cracky!

Ok, so there’s the short update. I’ll write more when I get some time – I have some pictures to post, but in the meantime, here’s a good one for you, a little something called “I guess I could do worse and have this guy’s job” (compliments of Brenda):

I just returned home from my first night covering security at the back gate at the Wild Animal Park. The good news is that I managed not to curse over the radio. The bad news is that they didn’t give me a gun. I suppose this was good thinking on their part, but with a gun I might’ve actually had something to do. Let me tell you, not a whole lot goes on at the back gate between five and eleven pm. I think I saw a bunny cross the road, but it was pretty dark out, so it was hard to tell.

On the way home, as I was about to cross a very busy intersection, I saw a rather large dog bounding confusedly down the road. I pulled over my car and called the dog over, and lucky for me, he was pretty friendly and very cute. I then noticed another large black dog that was with him, but no owner in sight. I managed to get Pete (the first dog) into the trunk of my car so that I could read his tag – luckily, there was a number on it, and Pete’s owner answered right away. They’d been looking for the two dogs frantically for the past hour and said they’d be right over to pick him up (the black dog had headed down the road, across the intersection, and I couldn’t go after her). Unluckily for me, as I was securing Pete in my car, I slammed my trunk hatch down on the bridge of my nose, which proceeded to spill blood from the cut. Good thing I’m so prepared and had a first aid kit! Well, the owners drove up right fast, and the guy was an EMT so he checked me out to see if my nose was broken; alas, it’s just ugly. The woman took my name, address, and phone number, and I didn’t even ask her why as my head was still spinning from eight hours of mind-numbing boredom followed by a swift crack to the ol’ noggin. Anyway, they loaded up Pete and I hope they were able to track down the other dog. They were very friendly and very thankful that I called – they both seemed quite distressed, but relieved, too. So I’m glad I could help.

What do you think? Should I tell everyone at work tomorrow that I got cut in a fight at the back gate when I single-handedly stopped lion thieves from getting into the park, or should I just tell them the sad, sad truth? Hard-core, huh?