Back in April, our beginning (red) and intermediate (yellow) skaters (collectively called “special sauce”) was given the opportunity to scrimmage for the first time.  Sure, we’d done scrimmage scenarios in the past, but never back to back to back to back (you get the idea) jams with teams and scoring and real refs and what not.  It was all very exciting!  Especially since some of the newer skaters had only been there for a couple of practices, and I would’ve been immobilized with terror if I had been them.  But everyone played very enthusiastically, and we all learned a lot!  And, no one was injured, so bonus!

Even though this scrimmage was in April, I wanted to post some pictures and video here now because I’ve been pretty hard on myself lately when it comes to derby-land, and I wanted to give myself the opportunity to revisit a derby event that was fun and rewarding for me.  I’m not a great skater.  I block my own teammates (whoops!) and I’m about as slow as a turtle, but I’ve improved a lot in the year I’ve been skating.  And I will get better if I keep working at it.  Here are some pictures of the scrimmage, so you can visualize what it was all about. 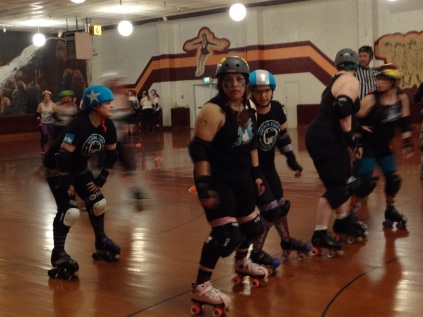 I don’t know why I like this picture. It looks like I’m moving fast, but backwards, which is pretty accurate since I’m pretty slow.

Most of the Storm City Roller Girls! 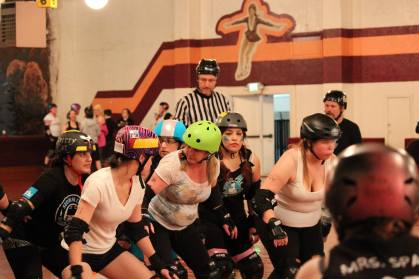 Getting set up to hit some bitches.

Here I am in the penalty box…for the first time.

I’m serious about blocking Glitter, coming up on the outside!

Now, are you ready to see the actual video footage???  Ah, take a deep breath (and I’m saying this to myself before I actually watch this) and hit play!  This video is long, but don’t worry – my epic jam is the first one in the video so you don’t have to watch the whole thing (unless you want to).  I’m wearing the black leggings with the silver shorts, and you’ll also notice that I’m wearing the black jammer cap with the silver star on the side.  That means I get to score points!  I immediately made it through the pack, then again on my second pass.  Trouble Axel, my jam coach, just kept telling me to keep going since the other jammer hadn’t even made it through the pack yet.  It felt like I went around the track and through the pack like five times, but on my third attempt at getting through the pack, I neglected to slow down as I skated right into them and got a back-block penalty, which sent me to the penalty box.  BOOOOOOO!!!  Ok, so maybe I deserved it.  But still, I scored some points for my team, which happens every time the jammer passes a player on the opposite team.

Scrimmaging was a lot of fun and I’m looking forward to doing it again sometime, and in the future, I will try to NOT block my own jammer or take her down.  Let’s just work on that.  But it’s like I see that jammer cap and I go completely mental…oops, sorry team.  Oh well…it happens to…everyone…???

WHEN YOU BLOCK YOUR OWN JAMMER:

20 thoughts on “I survived my First Roller Derby Scrimmage!”