I can’t believe how long it had been since I’d been camping, or sleeping outside in some manner. I think I was with Cecily the last time that happened…remember that, girl? It seems so long ago! Consequently, I finally decided it was time to get back out there. Chris and I picked a special weekend (his birthday, which was July 26) and a picturesque place (recommended to me from my supervisor), packed up, and hit the road.

The overlook at Cape Horn

Next, we turned north and followed the Wind River up through the national forest. We stopped at the Carson National Fish Hatchery for a quick peek (they were closed for maintenance) and then continued up further into the basin where we had a spectacular view of Mt. St. Helens. This year is the 30th anniversary of the eruption, so it was pretty dang cool seeing pictures of what it looked like before, during and after, and then the view during our trip.

We eventually picked up the Lewis River, which we followed in a general north-east direction. We stopped at Lower Falls, which was spectacular. There were signs all over the place educating people about threatened bull trout, which are in the Lewis River, and happen to be a fish I work with quite a lot in my job. It was really interesting seeing the habitat they live in – that water is cold. Brrrr!!! Anyway, the Lower Falls marks the historic end of the line for salmon returning up to spawning grounds since they couldn’t get up past the waterfall. Native Americans used to fish there when the salmon returned, but fish passage issues and depleted stocks have resulted in the absence of salmon returns there now.

View of Lower Falls on the Lewis River, Washington

We continued up the Lewis River, and after driving around for a while we finally found our targeted campground, at Twin Falls. Someone had removed the sign from the main road, so it was difficult to find. I was worried that we wouldn’t get a site (there were only 5 or so), and since the campground was free, I was sure that we’d be out of luck in the middle of camping season. But it was no problem – we got a fantastic site right on the river. Our site was down an embankment so we didn’t hear noise from any of the other campers, who appeared to be a small group of under-aged kids celebrating a birthday (Tankimus Prime, apparently) the best way they knew how – by sitting in lawn chairs in the river, drinking vast quantities of beer, and smoking lots of pot out of a hookah pipe. They were friendly though, and the river was so loud we didn’t really hear much from them. 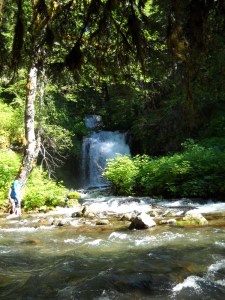 Our campsite on the Lewis River at the Twin Falls campground.

We cooked up “better with cheddar” pork sausages, drank a bottle of wine (what were we thinking when we bought that ultra-sweet blackberry wine???), and then moved on to s’mores over the camp fire. We slept in my tent, but I don’t think either of us got very much sleep (get your minds out of the gutter people, the ground was really hard and the river was very loud!). The morning light was beautiful on the river, and we were packed up and out of there by 9:30 (the Tankimus Prime group was still passed out).

Mmmmm…pork sausage with cheese inside! Nice and crispy…

We skipped over to the White Salmon River (amazing views of Mt. Adams!), following it down through the town of White Salmon, then crossed the Columbia River to Hood River where we had lunch at Big Horse Brewery. Because it was Chris’ birthday, he had two beers and I let him eat most of my corn on the cob! 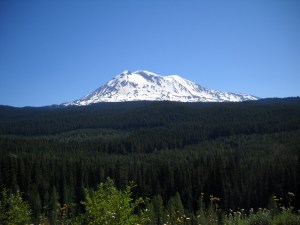 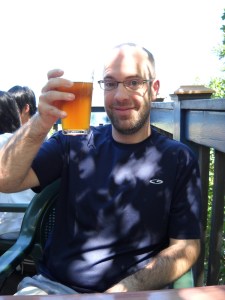 Our camping trip ended much too quickly, but next time I’m hoping that we’ll get to spend more than one night out in the woods. Chris has proven to be a very worthy camping partner…maybe next time we’ll try a short backpacking trip! In case you didn’t get enough, you can view more pictures by clicking here. I think that Chris had a good birthday weekend – I know I did!