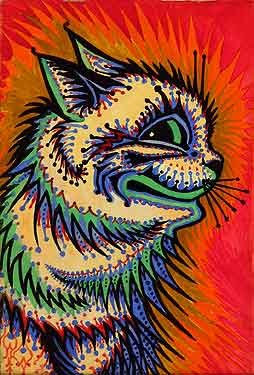 Happy Independence Day!  I chose today’s painting by Louis Wain because it almost looks like this cat is erupting into fireworks, which is appropriate for my current blogging soundtrack (hint: it’s just before sunset and people in my neighborhood are getting amped up on beer and whiskey and are ready to light things on fire and watch them explode already!).  I could not find a title or a date for this piece, but that’s not too surprising, since Wain painted a lot of cat pictures like this in his later years, many of which were untitled and undated.  But let me back up.

I can’t believe, that as a person who loves cats and who loves art, and even more loves art featuring cats, I’d never heard of Louis Wain.  Seriously.  Just do an image google for “Louis Wain cats” and you’ll see what I mean – what a prolific painter!  He was born all the way back in 1860 in London, and led an unusual life, it seems to me.  He was the oldest of six children; none of his five sisters were ever married, but lived with their mother; all except for the youngest sister, who was declared insane and was admitted to an asylum.  Strangely enough, Wain, who had a cleft lip, did not attend regular school as a child, but achieved modest success as a free-lance artist with his illustrations of animals and the English countryside.  At the age of 23, he married Emily, who succumbed to breast cancer a mere 3 years into their marriage.  However, it was during her time of sickness that Emily and Louis rescued a black and white kitten that they named Peter, who did much to comfort Emily while she was ill.  Louis produced many sketches and paintings of Peter, who changed the course of his art for the rest of Louis’ life.

While Louis’ early work was more realistic, Louis’ intermediate works were anthropomorphized versions of cats, wearing the latest fashions, having parties, and doing other things that humans might do.  During this time, Louis was actively involved with several animal charities such as the Governing Council of Our Dumb Friends League, the Society for the Protection of Cats, and the Anti-Vivisection Society. He was also active in the National Cat Club, acting as President and Chairman of the committee at times.  You gotta love a man who loves cats this much, right???

Sadly, during his later years, Louis was diagnosed with schizophrenia and was institutionalized until someone publicized his plight (he was quite a popular artist for his time, although poorly managed his money).  His new doctor diagnosed him instead with Asperger’s Syndrome, a type of autism, and Louis was moved to a hospital that had a garden and colony of cats, which Louis enjoyed for the last 15 years of his life.  It was during this time that his paintings became more abstract, using bright colors and complex patterns.  Louis died on July 4, 1939, making today the 75th anniversary of his death (seriously, I did not plan this).

H.G. Wells (who wrote The War of the Worlds and many other works of science fiction) said of Louis Wain:

He has made the cat his own. He invented a cat style, a cat society, a whole cat world. English cats that do not look and live like Louis Wain cats are ashamed of themselves.”