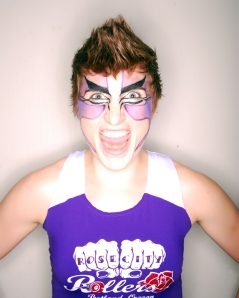 I am Super Stoked to write today’s “S” post for the A to Z Challenge!  Today’s Lady I Love is the magical Scald Eagle, or Hillary Buscovick, as the non-roller derby world knows her.  But for those of us who play roller derby, Scald Eagle is probably at the top of most of our derby crush lists!  Scald Eagle plays for the Rose City Rollers, a league out of Portland, Oregon.  There are four “regular” teams in the league, and she plays on Guns N’ Rollers.  In addition to that, she’s on the Rose City Rollers’ all-star travel team, Wheels of Justice.  AND, in addition to THAT, she’s on freakin’ TEAM USA, a collection of 32 of the best derby players from across the United States.  So Scald Eagle is definitely the cream of the crop, y’all!  Team USA will compete with other derby teams from all over the world this December in Dallas for the Blood and Thunder Roller Derby World Cup…an event NOT to be missed by anyone remotely interested in derby!

But let’s get back to Scald Eagle.  Below is a short video taken from Team USA’s Stars vs. Stripes Exhibition Bout just this past February.  Now, if you don’t know anything about how modern roller derby is played, I’m going to give you the very basics; otherwise, the video might look like chaos.  But there’s a surprising amount of skill and strategy involved in derby, which I hope will become clear in a minute.  First, a bout (or game) is divided into two periods, each made up of several jams that can go on for a maximum of two minutes.  There are two teams, and each team has five players.  Each team has one jammer, and the rest of the players are blockers.  The jammers are the only ones who score points, and they do this by passing members of the opposite team (so if the jammer passes all members of the opposite team, that’s five points).  The 8 blockers make up the pack, which has to stay together on the track.  Members of the pack are trying to block the opposite team’s jammer from getting through the pack and scoring points, while at the same time, moving the other team’s blockers out of the way so that their own jammer can get through and score points.  So you can see where this can get complicated!!!

So in this exhibition video, you’ll see Scald Eagle do her magic; she’s number 50, and is wearing a white jersey and white helmet with a star on the side.  The star on her helmet means that she’s her team’s jammer.  Watch as she easily passes through the other team’s blockers, almost as if she’s invisible to them!  And remember, this is not easy.  This is Team USA here, and still, Scald Eagle flies through like it’s nothing!  Check it out:

I also found this older interview (from 2011, I think) of Hillary talking about what it’s like to play derby.  She seems down-to-earth, goofy and modest.  And she was just this way when she guest-coached my league, the Storm City Roller Girls, a few months ago!  I remember her saying something to me, but honestly, I don’t know what it was because I think I was just completely star-struck (and I know I wasn’t the only one).  She was an amazing coach, but the thing I remember the most from her was that she seemed so nice and authentic…I can’t imagine her playing dirty or being anything other than upstanding…she seems to have a lot of integrity!  It’s no wonder she’s a hero in the derby world!

8 thoughts on “Ladies I Love: S is for the Amazing SCALD EAGLE, My Roller Derby Super Crush!”