Today we have another non-human A to Z Challenge Ladies I Love-themed post for the letter G.  Let us return to the year 2012.  April 4, 2012, to be exact.  Events that occurred on this day in the little town of Morristown, Arizona, resulted in the world being forever changed: a little bit furrier, a little bit cuter, and a whole lot grumpier.  On April 4, 2012, Tardar Sauce (a.k.a. Grumpy Cat) and her brother, Pokey, were born. 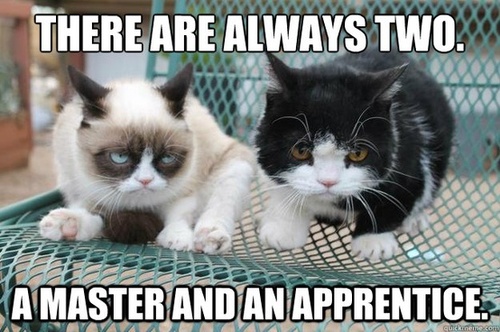 The original grumpy cat photo that unleashed unprecedented crabbiness into the world!

According to Grumpy Cat’s head minion (and yes, Grumpy Cat *is* a female), Tabatha Bundesen, Tardar’s features are permanently grumpified as a result of feline dwarfism, which has also left her back legs somewhat out of proportion to the rest of her body.  But her vet has given her a clean bill of health, and Tardar has the green light to spread curmudgeonly crankiness to her heart’s content.  But truth be told, as grumpy as Tardar Sauce looks, she’s actually the more friendly of the two, with Pokey being the grouchier of the siblings.

The Grumpy Cat phenomenon all started when Tabatha’s brother uploaded an excessively grumpy photo of Tardar Sauce to Reddit (back in September of 2012), and the world has reveled in the glow of a cat that is both adorably cute and excessively grumpy ever since.  Some of Grumpy Cat’s favorite phrases, built into popular memes that have circled the Interwebs thousands of times over, include “…it was awful”, “…I hate it”, and the classic “NO.”  Grumpy has an official website (The Daily Grump, where you can purchase Grumpy Cat Odor Eliminator and Grumppuccino), a Grumpy Book, and more awards than you can shake a stick at, including the Lifetime Achievement Award that she received at the 2013 Friskies.  And she deserves it – with a face like hers, she’s impossible to ignore, especially when she’s throwing insults around like nobody’s business!  Here are some of my favorites: 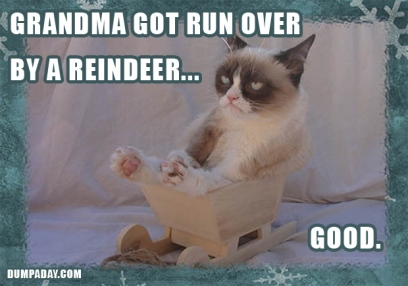 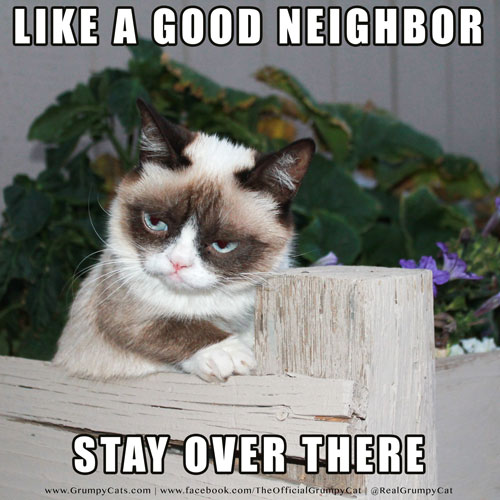 And speaking of Friskies, Tardar Sauce has done several commercials with Friskies in the “Will Kitty Play With It?” series!  They are grumpy and adorable!  But, in honor of Tardar’s second birthday (she’s entering the Terrible Two’s, everyone!!!), here’s a special Friskies birthday video (no, I’m not a sales rep for Friskies…they just do great Grumpy Cat videos!).  Long live Grumpy Cat!!!