Now, don’t get me wrong – I think the Grand Canyon is pretty friggin’ spectacular.  And I also think it has definitely earned its place on the 7 Natural Wonders of the World list.  I’m just saying, “grand” is kind of subjective, and it could be a perspective that some people might not necessarily agree with.  I, however, am not one of those people.

Yay Grand Canyon!!!  Bright and early, we headed northwest from Sedona up to the South Rim for our Valentine’s Day adventure.  Chris had never seen the canyon before, but it was on his bucket list, so we wanted to do it right.  And you know what that means…

And neither of us had ever been on a helicopter, so that was a first for both of us.  The most fantastic part of the ride was flying about 100′ over a flat expanse of Ponderosa pines, and then all of a sudden we were flying 100′ PLUS another few thousand feet above the ground!  The helicopter stayed level, but of course, our stomachs dropped (along with our jaws).  I managed to take some video of the flight, which also features me acting like a complete spaz (as per usual, so don’t be surprised):

(REALLY???  Out of all the screen shots that could’ve represented this clip, THIS picture was the one selected???  REALLY?????) 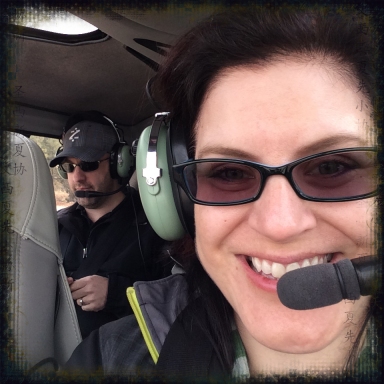 Me and Chris in the helicopter!

After the flight, we stopped off at some of the view points to take a look around from the ground (and to collect a few stamps for my National Parks passport, which I actually forgot at home – d’oh!).  All of the views were spectacular, and they all looked something like this:

It is amazing how the brain can barely process the visual field of depth of the Grand Canyon – when you’re looking at that much space in front of you, it’s hard to believe that you’re not looking at a photograph or a painting.  It hardly seems real!  Of course, we had to take a gazillion pictures, even though they all kind of look the same, and a picture will rarely ever do the real thing any amount of justice.  But I can show them all to you, just let me know if you want to see them (j/k!).  I won’t torture you with all of them right now, but here are a couple of my favorites:

By the time we made it back to Sedona, the sun was on its way down and we were ready for our Valentine’s Day dinner (which was delicious – we both had the lobster).  I hope that you had a pleasant VD experience, and are looking forward to hearing about the rest of our mini-vacation in Arizona!  More to come soon… 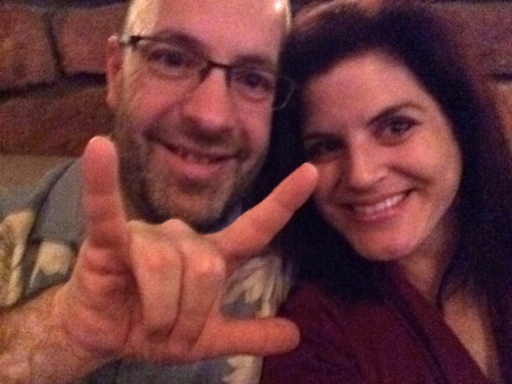