Yesterday I was a happier person.  Albeit, I was a person who sneezed and sniffled and had a nose so itchy I wanted to rip it off my face and throw it on the ground, (like so, below) but I was happier.  I was a person who was not diagnosed as being allergic to anything.

Which I thought was odd, since my nose was determined to become the slimiest creature on earth, a title which is technically owned by eels, who produce the most slime per unit body mass of any other animal on earth.  Why, nose, why go for such a title?  How about something a little less mucousy and sneezy?  I argued with my nose about the issue, but she was not having any of it.  Hence, yesterday I took myself down to the allergy center to get tested so that I could potentially dash my nose’s dreams of becoming permanently disgusting.

You might notice that allergen 2 seems to be a lot angrier than the control (-) or allergen 1.  Can you guess what it is that I am allergic to?  I will give you five guesses (that’s your hint, btw).

So let’s start over again.  Yesterday, before allergy testing, I was a happier person.  When I walked into my house, this is what I used to see: 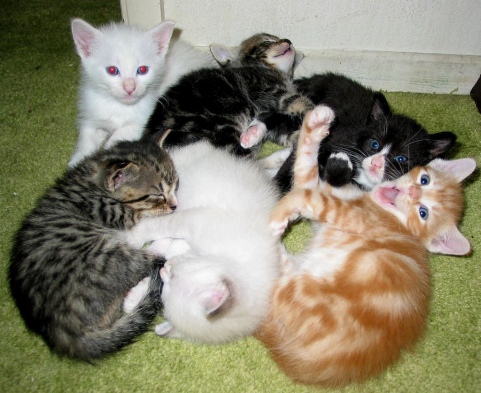 Awwwwww, right???  Look at those itty bitty kitties!  So snuggly and cute (well, the white one looks a little demonic, but for the most part, they are pretty freaking adorable).  WELL NOT ANYMORE, JACK, because since I’ve been allergy tested, all I see now when I walk in the door is this:

Which will inevitably lead to this:

Which will obviously end up with me like this:

What’s a girl to do?  How can I be a crazy cat lady AND be allergic to cats?  Oh, the bitter, bitter irony.  You taste like cat fur and litter box dust, all rolled up into one huge hairball of sneeze.  Why, sucky immune system, why???

The good news is that I am willing to live the rest of my life taking potentially unhealthy doses of nasal steroids and antihistamines every day (or at least until all the cats die and I run out of cat refills).  Also, I did not take any tests yesterday that indicated I am allergic to Lucky Charms cereal.  So wow, bright side it is.  Suck it, universe.