The above picture is of our back yard, and it was taken about a month ago. The flower bed areas were a mess, there was chain-link fence against the house, random metal and wood poles sticking up from the ground, and general crappiness. 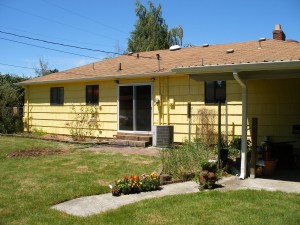 This was taken after our house was painted. The front looked great (see pictures from previous post), but the back still needed work. I trimmed the rose bushes and got rid of all the dead branches, but we still had a way to go. 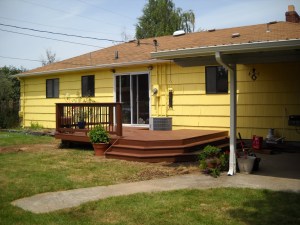 Finally, last weekend, Chris’ teacher friends built our new deck! It is awesome!!! It is made out of composite material, but the deck actually looks more like wood than fake stuff. There’s a built-in bench in the corner, and we’ll probably put a custom-built table over the heat pump to hide it and have a useable surface. Also, we got rid of the weedy flower beds, random metal structures, and have room for our potted plants. We’re going to install landscaping around the deck starting at the end of the stairs (where the potted bush is), wrapping around to the house (where the rose bushes are). We’ll also put in some paving stones for a walkway, and we’re going to build a fire pit about where I stood to take the picture. Pretty sweet, huh?