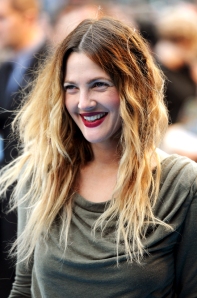 Today’s A to Z Challenge post is brought to you by the letter D!  I know it’s kind of silly, but I’ve had a girl crush on Drew Barrymore for as long as I can remember.  She’s only a year younger than me, and I’ve always admired her because she seems like a real person – she’s definitely had her ups and downs, and even though she’s Hollywood Royalty, she doesn’t take herself too seriously.  She’s not afraid to be dorky or play real people in her movies, people who aren’t always beautiful and perfect.  I don’t know – maybe I’m projecting my admiration onto someone without really knowing who they are, but from what I see, I’m proud to be a Drewbie!  Here are only ten of the many reasons why I love Drew Barrymore: 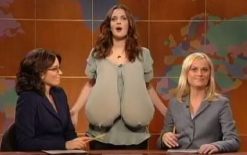 Up next in the A to Z Challenge is the letter B! And since my theme is Ladies I Love, I will tell you about one of my all-time favorite artists, Lynda Barry.  I read her first book, Girls and Boys (1981), before I was ten years old and it left an immediate impression on me.  I had never read comic strips quite like hers – funky people, honest stories, smart humor and a fearlessness and vulnerability that I had never seen anywhere else.  While my earlier exposure to Lynda Barry’s work came in the form of comics and drawings, Lynda has diversified her art and interests as her career progresses.  She wrote a couple of novels (Cruddy is one of my favorite works of hers), and more recently, a pair of drawing and writing books called “Picture This” and “What It Is“.  Her research asks “what is an image?” and examines the connection between drawing and writing with brain function and the resulting physiological responses of doing art.  She has done a number of interviews (a couple of good ones are here and here) describing this line of research.  Currently, Lynda teaches classes about drawing and writing at the University of Wisconsin-Madison; you can follow along with her lessons through her tumblr (which I am obsessed with).

Two panels of a comic by Lynda Barry. Child-like and often semi-autobiographical, Lynda tells stories from all of our youth experiences.

I love Lynda Barry.  She has been a creative influence on me since I was a young kid.  I tried to emulate her spirit in my own cartoons.  I met her at Comic-Con.  I’ve bought a couple of her paintings.  I WISH I could take one of her courses.  But because I am not a total stalker, I will, for now, have to settle for taking some of her advice about doodling to a practical level.  Doodling, according to Lynda, can increase concentration and rescue us from tedium.  This advice has resulted in, for you, a small collection of some of my favorite doodles that I’ve done during meetings at work.  You can click on the images to make them bigger, and for a short description of the meetings during which they were yaawwwwnnn…oops…I mean drawn.

There is a kind of monkeying around with our hands that changes our sense of time in a tiny way that can make a big difference. Like doodling in the margins during a very boring meeting. It can make time feel like less of a cheese grater and more like sandpaper. That’s a small but critical difference. People employ doodling all the time, even those who are certain they never draw will make a complicated pattern of marks with their thumbnail on a Styrofoam cup when someone very boring is speaking at length. Nearly everyone does this.  — Lynda Barry

Like Loading...
Oh my god, Comic-Con was so much fun. I was a little anxious about going, since I don’t like crowds much and dealing with parking, but the whole day went off without a hitch. Nik and I were fortunate enough to purchase tickets over a month ago, and it’s a good thing because the event was sold out weeks ago. My main objective was to see Lynda Barry, my all-time favorite cartoonist, and to meet Ray Bradbury, a long-time friend of Nik’s. And the day was a success! I could go on and on in detail about the whole thing, but I’m sure you’d rather see the pictures than read a long ramble about all the crazy storm-trooper wannabes, the hordes of comic-crazy people, and Erik Estrada trying to dodge crowds by putting on a silver Mardi-Gras style mask. Well, too bad – I’m going to ramble about the day’s events anyway.
Actually, we parked only about four blocks away, and didn’t have to wait in line at all for our badges at registration. I wanted to go see Matt Groening and Katey Sagal, who were speaking in the Futurama panel first thing, and that was when we got our first experience of the long lines at Comic-Con. Amazingly, even though our line extended almost back to La Jolla, we got into the ballroom which was only about half-full. Wow! After we watched the panel discussion for a while, we headed up to Forry Ackerman’s conference room (Nik used to work for him), but he wasn’t there…I guess he had spoken earlier and we missed it.
Then, the highlight of my day – I trekked down to the Exhibition Hall to find Lynda Barry. Now let me tell you something. This was like finding a needle in a haystack. First, you can’t see one end of the hall to the other. It is HUGE!!! And there are TONS of people there – the event was sold out at 125,000. So, it was me against 124,999 other people trying to find Lynda. The day before I had assembled my velcro-t-shirt message to say “HELP ME FIND LYNDA BARRY” but it wasn’t working so great. However, after only about 30 minutes of wandering around in a sensory-overload stupor, I found myself in front of the Drawn and Quarterly booth, who published Lynda’s last book. I asked the girl behind the table, “can you please tell me where Lynda Barry might be?” and she pointed over her shoulder and lo, there she was. Just sitting there! Talking with people! I finally got to approach her and gave her a copy of the ‘zine that I wrote about my favorite women cartoonists (featuring Lynda, of course), and she was so happy and warm and amazing. We had a nice conversation – I can’t quite remember about what, but I’m fairly sure that I just gushed about how amazing she is and what an inspiration she has been to me for nearly my entire life, and how she wrote me back when I wrote to her and I started to draw cartoons and eventually was published in a weekly paper but now I’m a biologist with the Fish and Wildlife Service, so go figure. And she said that biology was where it is at, and we chatted about marine snow and cephalopods. Awesome. See – pictures! That’s Lynda worshipping me, and me pretending to be bored (that was Lynda’s idea, by the way).

Well, I was happy. I didn’t really care what happened the rest of the day. We scarfed down a quick lunch, then made our way towards the room where there was to be a panel discussion featuring the writers of “The Office”, including Rainn Wilson, who plays Dwight Schrute. The line wasn’t long, so I was sure we’d get in. Psyche! The line was CRAZY long – it went down the hall, out the door, wrapped around the back open area, down a staircase towards the bay, then down another staircase, then up a staircase, then out to Escondido. I changed the message on my shirt to read “Mrs. Schrute” in hopes of increasing my chances of getting in, but alas, about halfway towards the shuffle to the room, we were informed that the panel room was at capacity and there was no way we’d get in. Oh well! So, we dashed through the autograph area where I saw Erik Estrada donning his mask and got Katey Sagal’s autograph. Then Nik and I wandered around the Exhibition Hall again, which had gotten even more crowded, and I purchased a Dwight Schrute bobblehead and a “Science Bitch” t-shirt, and lost one of my tree of life earrings which I’d been wearing every day for about the last six years.

Me and Nik waiting in line for “The Office” panel, somewhere near Mira Mesa.

Me and my new boyfriend (the one in red. The guy on the left was a dork.).

This guy’s sign read “Free High Fives!”, which I cashed in on. However, I did not redeem the sad-looking “Free Hugs” guy’s offer.

It was then time to try to find Ray Bradbury. Nik had Santiago’s cell phone number (who was responsible for moving Ray around in his chair), but we weren’t able to cross paths prior to Ray’s speaking engagement. But, we got good seats in his spotlight lecture, and afterwards went over to say hi. Ray immediately saw Nik and gave him a warm hug hello; we then followed him with his entourage and adoring fans to the autograph area for an impromptu signing. After that, we escorted Ray through the Exhibition Hall (“step aside, Ray Bradbury coming through, move out of the way please!”), out the back through the loading dock area, to his limo. We were invited to join him for dinner, so after saying another hello to Lynda, we walked back to the car and drove over to San Fillipos’ Italian restaurant near the Hillcrest area. So, it was me, Nik, Ray, Santiago, the limo driver, a bookstore owner guy and another guy eating spaghetti and chatting about books and film and Ray’s influence on pop culture in general. Did you know that Ray was there at the very first Comic-con? And, he insisted that the Academy watch Schwartzenegger’s first film Pumping Iron, launching him on his trajectory towards governatorship? And, he’s the one who said that Rocky should end sad but, in losing the fight and winning love, it would really end happily? And the biggest message of all – it’s all about love? Do what you love, do what you love. I didn’t say very much because how could I? What do you say in the presence of a genius? I sometimes live by the saying that goes something like “better to stay quiet and think that you’re an idiot than to open your mouth and let everyone else know it.” Suffice it to say, I was just honored to be included in the group and take everything in.

Ray Bradbury and Nik, just prior to leaving in the limo for dinner.

Anyway, that’s the rundown – I’ll put all of my pictures online in a Picasa album that you can get to by clicking here. I hope you enjoy it! I know I did.