I’m sad to report that my digital scrapbooking momentum has all but disappeared.  However, because of the law of conservation of energy, my Brainy Girls project has been thriving.  So, I just wanted to give you a brief update on how it’s going. 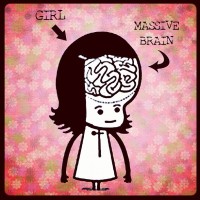 Running the Brainy Girls website and keeping up with its associated social media promotion actually takes quite a bit of time.  However, I’m finding that it’s finally paying off in terms of interactions with the public.  It’s starting to get some attention in several STEM communities, which is really fun.  I’ve printed up bookmarks and sent them out to those who’ve requested them, and will probably need to have more printed up soon.  Every two months I completely change all the material on the website (except for March, which is a special one-month issue) and that’s quite a bit of work to come up with new stuff related to a theme, archive the old material, and promote promote promote.  But that’s ok – I really like writing and it’s the most rewarding thing in the world when I get comments on my website.

Want to see some numbers about public interaction?  Here they are:

Anyway, I look forward to my site growing and gaining more exposure.  I also have a Pinterest account and YouTube channel for Brainy Girls, which are kind of secondary to the other forums above.  I’m starting to get into guest blogging and have a couple of requests out there for people to write on my site – we’ll see what happens.  I have to get the kids involved somehow, which is what I’m hoping to do with guest bloggers!  And, if you have any ideas on growing Brainy Girls, let me know!